BERKELEY, CA —Scientists at the newly-funded California Firearm Violence Research Center on the University of California Berkeley campus have finally answered a centuries’ old question about the lethality of firearms, concluding within minutes of study that guns are almost certainly fatal to humans.

“As scientists we’re always wary of making any definitive claims about a subject,” said Rachit Darzi, head scientist at the research center, “however, after a few moments of analysis we were able to determine that there’s a clear and strong correlation between firearms and human death.” 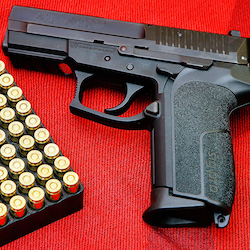 An image of a firearm, which scientists have now linked to several million human deaths

“It’s entirely possible that guns were designed with the express purpose of ending life, though more experiments will need to be run before we can say that with absolute certainty.”

Ever since the invention of firearms people have speculated that they could be used to fatally injure animals or humans. Scientists were close to answering this age old question until the NRA banned any further research on gun violence in 1996. The $5 million funding for the California Firearm Violence Research Center is the first time in 20 years that money has been dedicated to this field of study.

“With the recent rash of news stories involving mass death in this country we felt like it was time to really explore how and why all these innocent people were losing their lives,” explains Sen. Lois Wolk (D). “We realized that the thing all of these incidents had in common was that the perpetrator was discharging a firearm at the same time the victims were dying.”

“We felt that warranted further investigation.”

Darzi says that the connection between firearms and violence can be difficult for the average person to grasp because of the complicated mechanics involved.

“It’s tricky because it’s not so much the gun itself that causes fatal injuries,” says Darzi, “but rather the bullets that are propelled with lethal force from those guns.”

“This problem is compounded by the fact that the naked eye is not able to detect a bullet in motion.”

Not everyone agrees with this scientific conclusion. The NRA was quick to respond to these allegations by claiming that this is simply more liberal propaganda that has no basis in the reality of firearm ownership.

“Everyone knows that guns were invented so that scared and helpless people could attain some semblance of control and power over their own lives and the lives of others,” clarifies Wayne LaPierre, CEO and Executive Vice President of the NRA.

This announcement is expected to cause a national uproar that will slowly fade away until it’s reignited by a similar case of gun related violence sometime in the future.