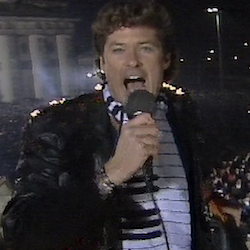 The face of freedom and democracy

LOS ANGELES, CA — With a wistful glimmer in his eyes and the hint of a smile forming on his lips, former ‘Baywatch’ actor and German pop star David Hasselhoff twisted the lock on the gold-bezeled glass case in his closet that enshrines the iconic, battery-powered, light-up black jacket he wore during his famous New Year’s Eve performance at the rubble of the Berlin Wall, dusted off the sleeves, and uttered the phrase, “hello, old friend.” He then swished his piano key scarf over his shoulders, ran his hands through his hair, and admired himself in his full-length mirror. “God dammit, Hoff, you’ve still got it,” said the actor-turned-singer whose song “Looking For Freedom” topped the German pop charts in 1989 and became a rallying cry for East Germans who supported tearing down the Berlin Wall. ‘The Hoff’ then flipped on the twinkling lights that bedazzle the jacket, croaked out a few bars of ‘Freedom’, and practiced clapping his hands while holding a microphone. The 64 year-old actor from the hit series “Knight Rider” did not seem fazed by the prospect that it could be decades before he had the opportunity to symbolically tear down the Mexican border wall proposed by president Donald Trump. “You took down one wall, pal, you can take down another.” It’s unclear whether Hasselhoff would attempt to unify the Mexican people by resurrecting the hit single “Looking For Freedom” with a re-release of the original, by producing a remix for a younger audience, or by releasing the song in Spanish. As of press time Hasselhoff was shedding a single tear while caressing the sacks of Berlin Wall concrete that he still keeps in his closet at all times.