WASHINGTON, DC – The Trump administration has unveiled a new Undercover Classroom Marshal Program aimed at deterring potential school shooters by planting a covert, armed agent inside every classroom in America.

The ambitious plan is set to take effect at the beginning of the school year. This will give the Department of Homeland Security three months to recruit and train the estimated 30,000,000 new agents it will need to enact the plan. 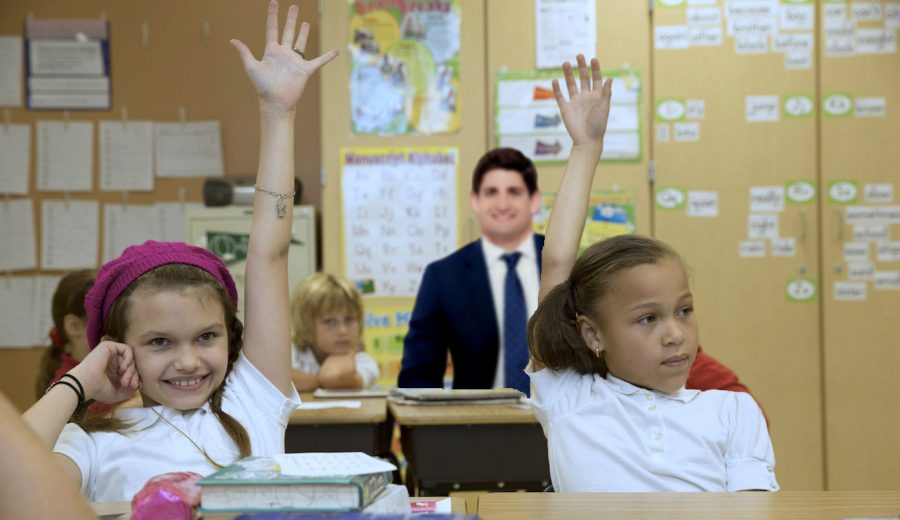 One of these students is actually the undercover classroom marshal. Hint – it’s not the girl in the knit cap

“This administration is committed to protecting the lives of each and every student in this country,” announced Education Secretary Betsy Devos in a meeting with lawmakers this morning. “And if the teachers are not up to the task of defending our students then it’s our civic duty to provide someone who will.”

Based on the successful Air Marshal program that has been in place since 1968, this new Undercover Classroom Marshal Program will see armed, plainclothes officers seamlessly-integrated within the student body. Only school administration officials and security personnel will know the identity of the classroom marshals. Teachers and students will be left guessing as to which member of the class is the actual undercover agent.

“If anyone could be the marshal then everyone is the marshal,” said Devos of the plan’s key component. “We expect the uncertainty will keep students on edge during the entire school day, which is exactly the state they should be in if they want to stay safe at school.”

When asked how the administration expects to pay for the program, Devos explained that funding will come from cuts to teacher salaries, gutting of arts education, and diverting funds earmarked for PBS and NPR. Devos will also be tapping Eric Prince, her brother and founder of the mercenary military group Blackwater, to provide additional personnel and resources.

Devos ended the announcement by highlighting another positive aspect of the initiative.

“Who among us wouldn’t want a second chance at high school? We’re hoping this new plan will allow late bloomers to go back into a high school environment and finally win the big football game, have their first kiss, or become the prom king or queen – all while getting petty revenge on the children of those who wronged them.”