CANYON OF THE CRESCENT MOON, HATAY — Ogling the vast array of Holy Grail candidates on display before her, Kellyanne Conway, renowned spin-master and counselor to President Trump, made a cursory sweep of the priceless artifacts before confidently choosing a tall, jewel-encrusted chalice from the collection in the hopes that it was the one true grail among a field of imposters. 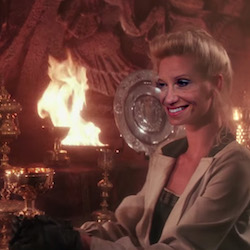 Stephen Bannon, Trump’s chief advisor and a well-known white supremacist, entrusted Conway with the grail selection after admitting that he was, “not a historian” and, “has no idea what it looks like.”

“Which one is it?” wondered Bannon aloud, mystified by the dizzying number of potential grails.

“Let me choose,” said Conway, her hubris blinding her with tantalizing visions of glory.

Conway, in a breathtaking display of vanity and historical ignorance, selected a garish, gilded goblet that would have been wildly out of place at the table of a humble carpenter, let alone the King of Kings, Jesus Christ.

“It’s more beautiful than I’d ever imagined,” breathed Bannon as the radiant glow from the chintzy chalice danced across his face, acting as a veritable mirror for his sins and misguided desires.

Bannon then dipped the false grail into a basin of holy water, concluded once more that this mug was, “certainly the cup of the King of Kings,” and then lifted it to his lips.

“To eternal life,” he toasted just before drinking from the phony grail.

This proved to be a fatal mistake.

The holy water from the false grail turned to poison on Bannon’s lips and he immediately succumbed to its lethal, mystical effects. The only remaining token of his existence was his swastika pin, which fell symbolically upon his ashes.

Conway, during an interview with CNN after the fateful event, explained that she did not choose the wrong Holy Grail.

“It was an alternative cup.”