WASHINGTON — F.B.I. director, James B. Comey, on Tuesday recommended that no charges be brought against presidential hopeful Hillary Clinton, though the bureau’s investigation did reveal several concerning details regarding the former Secretary Of State’s e-mail practices, namely her use of BonziBUDDY, Microsoft’s affable ape adware service, to send a majority of classified correspondence. 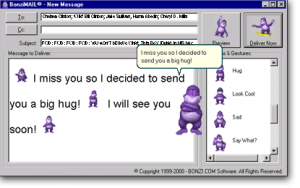 “We believe that criminal charges would not be appropriate in this case,” Mr. Comey announced, “though we find it completely incomprehensible why [Clinton] would use the BonziBUDDY in any serious capacity.”

“We’re not even entirely sure how it was still installed on her computer.”

BonziBUDDY, a popular chatbot and computer agent fronted by a friendly purple gorilla named Bonzi, was launched by Microsoft in 1999 to help computer illiterates seamlessly navigate the ever-expanding world wide web. The software was discontinued in 2008 after it was found to be riddled with malicious spyware and adware capable of tracking its users’ data and unknowingly setting home pages to bonzi.com.

“Furthermore,” Mr. Comey continued, “it took our investigators several weeks to uninstall the dozens of taskbars and toolbars in Mrs. Clinton’s Netscape Navigator browser, to sift through the thousands of forwarded chain letters in her e-mail outbox, and to read the entirety of her correspondence with SmarterChild.”

“We knew we were in for a challenge when we discovered an AOL 3.0 free trial CD in her disc tray.”

Aides close to the Clinton camp confirmed that the presidential nominee used the BonziBUDDY software for more than sending delicate e-mails, but also shared jokes she had been told by BonziBUDDY, made BonziBUDDY sing for her, and used BonziBUDDY’s search functionality to look up answers to trivia questions while playing the computer game ‘You Don’t Know Jack’.

“Mrs. Clinton used every political tactic in the book to try and prevent our team from accessing the full database of her e-mails,” derided Mr. Comey, “but we were fortunate to discover a Notepad document on her desktop named ‘Passwords’ that provided us with all of her login information, from her State Department e-mail all the way down to her Xynga account.”

“We also learned that hampsterdance.com was her most visited site.”

Mrs. Clinton was not available for any questions by phone because the line was busy while she surfed the net on her dial-up service.