“That was so lame,” says disillusioned viewer Dan Fitzroy of Ohio. “I paid $100 to watch this thing and the black guy barely even threw a punch.” 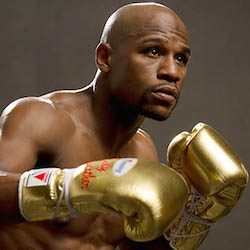 Mayweather is known as a technical boxer, yet viewers were hoping he would kill his opponent

“Isn’t that what he’s trained to do?”

Twitter was quick to react to the boring bout with such quips as “Dancing With The Stars with fewer punches #MayPac” and “Mayweather only needs 4 more punches on his card before he gets a free sandwich #MayNap”.

Mayweather was crowned the champion with a score of 116 to Pacquiao’s 112, a scoring metric previously unknown to 95% of viewers that rewards technical prowess as opposed to brute force.

“Isn’t the fight over when someone’s too bloody to stand up?” asks Cheryl Palmer, a disgruntled viewer from Arkansas. “I guess I was expecting the black guy to get really angry and bash the hispanic guys’ face in.”

“That’s what I’m used to seeing from the news.”

The nation is set to grumble about the issue for several days before redirecting their energy to lambasting the violent protests in Baltimore.