Valiant Driver Decides Rattata Not Worth Trying To Catch

CHICAGO — Thrust into a heat-of-the-moment decision, frazzled commuter Logan Rowell bravely chose not to endanger himself and everyone else on the road by trying to catch a low-level Rattata, a purple rodent-inspired creature that is one of the 151 collectible Pokémon featured in the new augmented reality smartphone game Pokémon Go.

“I felt my phone buzz and when I took my eyes off the road to check the game I saw that there was a Rattata right next to me,” explains Rowell. “I knew I only had a split second to decide whether or not it was worth blindly swerving across two lanes of traffic and a crosswalk to try and catch.” 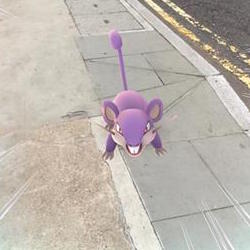 Rattata is one of the more common Pokémon along with Ekans, Weedle, Pidgey, Spearow, and the dreaded Zubat

“Ultimately I decided not to since they usually have pretty low CP [Combat Power].”

Pokémon Go is a smartphone game that allows players to engage with their real world surroundings in order to catch digital critters known as Pokémon. The game was an overnight cultural phenomenon and now clocks more active daily users than Twitter. With millions of active players, the game has unintentionally become a veritable litmus test for stupidity.

“I only take my eyes off the road when I hit a Poké Stop, pass by a Poké gym, or see a really high level Pokémon nearby,” declaims Rowell. “I also drive very slowly while playing.”

“Because if you drive slowly enough you can hatch your eggs to get more unique Pokémon.”

Not all Pokémon Go users have displayed Rowell’s iron will and lucid decision-making while playing in dangerous situations. Reports have surfaced over the last week detailing a wide range of incidents, from simpletons stumbling down dark alleyways and getting robbed to pinheads trespassing in restricted areas and injuring themselves.

“I know I made the right call,” says Rowell, “but I can’t help but wonder if I would have made the same decision if it were a Snorlax, Rhydon, or Dodrio on my screen.”

“Hell, I might have even pulled over for a Pidgey since you can farm them for some serious XP [Experience Points].”

Rowell’s effort was made doubly heroic and selfless in light of the fact that he only needed 2 more pieces of Rattata candy to evolve the Pokémon into its superior form, Raticate.