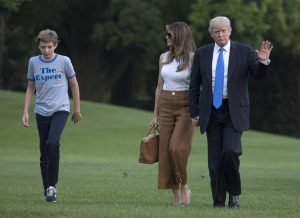 Trump maintains a healthy separation from Barron at all times

MAR-A-LAGO RESORT, FL – During an impromptu press conference outside Mar-a-Lago, President Trump defended his administration’s immigration policy of separating children from their parents by stating that, “being separated from parents makes kids strong. Believe me. It’s what my father did – by the way a very great father, the best – and it’s why Barron is so tough. From what I can tell he’s very tough.”

This is the first time Trump has publicly acknowledged the existence of Barron since election night.

“Barron likes being separated from me,” Trump continued. “What kid doesn’t want to be away from their parents? Kids don’t want their parents hanging around. I know I was glad my father was never around. He completely ignored me. And that made me strong. Just like Barron. It’s good for him.”

President Trump currently suffers from all of these symptoms.

When pressed about his Father’s Day plans with Barron, Trump explained that he and Barron shared an “incredible” Facetime call earlier in the day. “Barron is so good with the technology. It’s incredible what these kids can do. We did this thing – by the way not many people know you can do this – it was a video call. So I could see his face. And he looks strong. Just like his dad. He looks a lot like me, which is a good thing. Believe me.”

The president did not respond to questions about future plans to visit Barron. When asked if he had received a Father’s Day call from his daughter, Tiffany, Trump became visibly confused and responded that he, “has no idea who that is.”