Obama: We Ask That You Keep The Orlando Victims In Your Thoughts, Prayers, And Politicized Facebook Rants

WASHINGTON DC — President Obama, once again addressing the nation regarding the devastating events in Orlando, has renewed the call to keep the victims in our thoughts, prayers, and politicized Facebook rants.

“Too often as a nation we watch these tragic events unfold before us,” said the visibly exasperated commander in chief. “But in this time of darkness there is a beacon of hope – all of your courageous hashtags, supportive Facebook profile picture updates, and your teary-eyed Snapchats.”

“The terrorists can never take that away from us.” 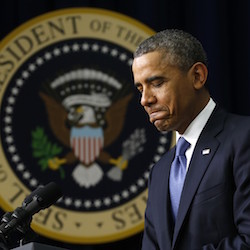 President Obama addressing the nation on Orlando tragedy: “We need to stand united behind a strong hashtag”

“We’ve become so desensitized to these mass shootings that we stop tweeting about them once they’re no longer trending,” said Obama. “It blows up our Facebook news feeds for a week, gets to the front page of Reddit, and then becomes another footnote on internetarchive.org .”

“I urge you to keep this tragedy trending.”

Obama made sure to praise past efforts from the social media community in the wake of recent tragedies but believes that we can do better.

“#prayfornewtown after Sandy Hook, #aurora, #Black9 for Charleston, #todayweareallhokies for Virginia Tech, and the unfortunately misspelled #sanbernadino after the recent terror attack in California,” listed the somber president. “All strong hashtags. All no longer trending.”

“We can do better. Orlando deserves better.”

Millions of people took to social media following the attack to express their own thoughts, feelings, and ill-informed rantings about everything from the state of gun control laws to, confusingly, the entire city of Orlando needing to be razed to the ground.

“Time and time again these tragedies lead to a national conversation about the merits of the second amendment. But I think we should take a moment to appreciate the freedoms afforded to us in the first amendment.”

“Without those freedoms we would never be able to express all of our half-baked, knee-jerk opinions and reactions to these events with such steely tenacity and unabashed hypocrisy.”

The president concluded his speech with an announcement that his administration will be canvassing the Internet with a “social media stimulus package” to help insure that the tragedy continues to trend on all the top social networking sites.

“My team is hard at work generating topical memes, partnering with the top teenage YouTubers, and is working closely with Snapchat to oversee a new filter that will make a cartoon teardrop appear on a user’s selfie,” outlined the president.

It’s too early to tell whether or not the president’s plan will have any effect on social media trends since #NBAFinals, #GameOfThrones, and #FirstDayOfSummer have already eclipsed any references to Orlando.